My Role: I was responsible for research, concept, (rapid)prototyping, CUI & micro-interaction

Created within: 5 weeks as part of a mobile interface course, BA Interaction Design at ZHDK in 2016

Lingo is an addition to the Duolingo learn process and makes language learning even more fun. Lingo is like a friend (a virtual friend tho’) that is interested in you. With Lingo you can talk about the topics that interest you the most right now.

Conversational User Interfaces (CUI) had a considerable impact on the UX fields in 2016. During a mobile interface course, we had the task to build a meaningful conversational service with a focus on atomic applications and micro-interactions.

We live in a globalised and connected world. Languages get more and more essential to communicate in intercultural affairs. That’s why languages should be more efficient, exciting and accessible to everyone.

Lingo is an addition to the learning process of Duolingo, a free language learning app, with over 150 million learners worldwide. It completes its learning process with the possibility to use and deepen your learnings in a real life-like conversation.

„We created Duolingo so that everyone could have a chance. Free language education – no hidden fees, no premium content, just free.“

What Duolingo was missing till recently (Duolingo introduced its own language bots last September) was a way to use and deepen the new knowledge gathered through the playful exercises in a real conversation.

I intended to build upon what Duolingo is already doing great and close the gap with a meaningful conversational buddy.

With Lingo you can learn new languages and talk about the topics that interest you the most right now. Lingo adapts on your language level and is more a foreign friend or companion than a teacher. Lingo supports the conversation whenever it gets stuck, helps with unfamiliar words and how to structure sentences even better. Furthermore, Lingo expands your vocabulary and connects location-independent learners with the same interest. Lingo encourages cultural exchange and learning languages over the conversation. 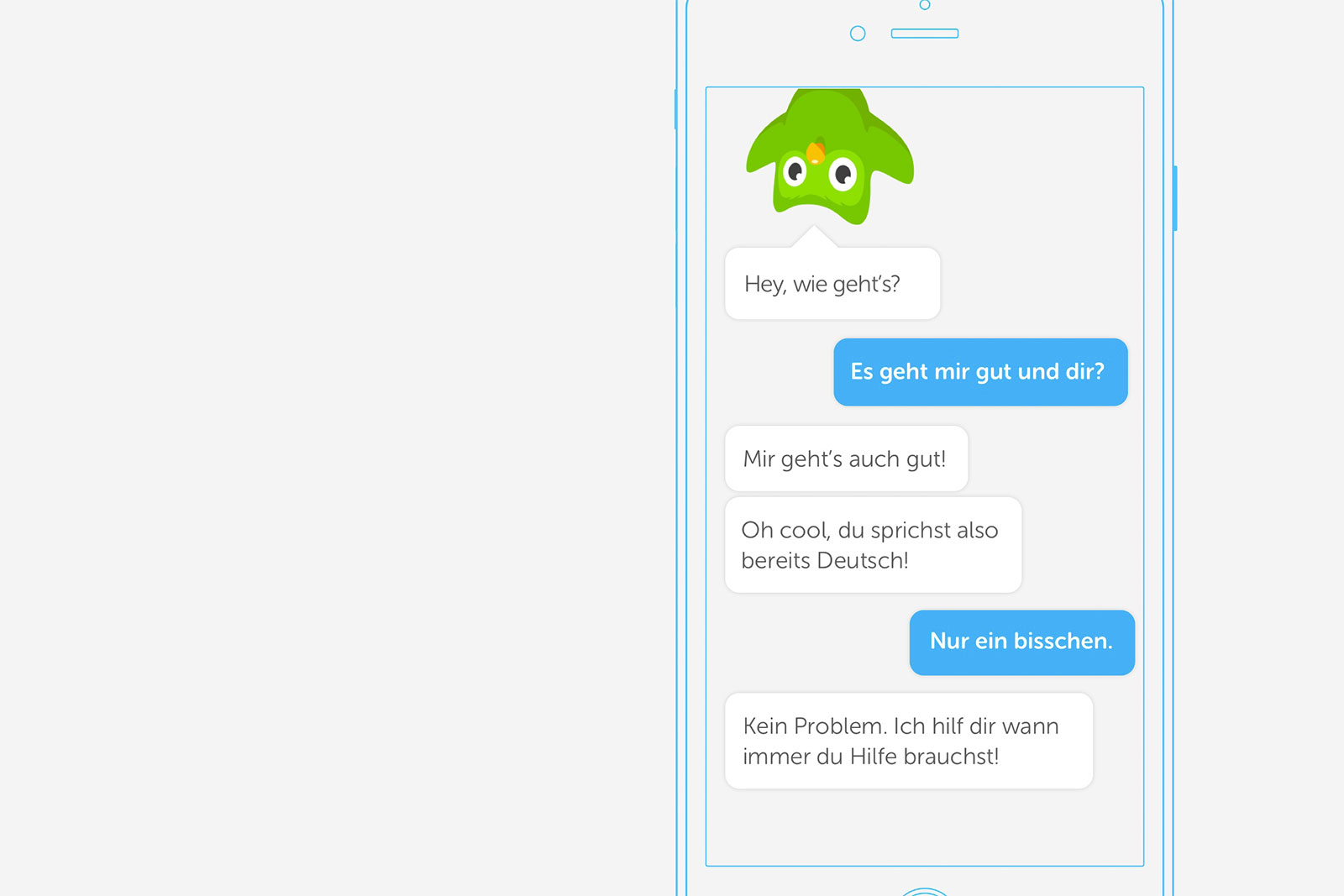 I wanted to focus entirely on the conversational part of designing a conversational application and therefore decided to build upon the existing UI & UX of Duolingo.

A conversation with Lingo

In the first contact with Lingo, the user gets picked up on its language level introduced to all some essential functions and explained how this conversation with Lingo can help in learning languages better.

How are you today?

Smalltalk is an essential part of learning new languages as someone who learns a new language also wants to use it in a real environment. This part of the conversation with Lingo contains conversation flows like «How are you?» «Where are you from?» but also places and situation-specific information as «The weather in Zurich is beautiful today, we should go have a swim in the lake!».

Lingo can also jump into the role of other people. The vocabulary can be tested and deepened with role plays, in which real situation and user-interested new words and sentences can be learned too.

But contextualised learning can also be talking about a new tv-series, that the user is interested at the moment.

This part of the conversation should entirely focus on the needs of the user and give the user a starting point for a conversation about such topics in real life.

Last but not least, the user should be rewarded during the conversation and get tips on how and where to improve.

After the last part of the conversation with Lingo, the user should know about the existing weak spots and how to improve these knowledge gaps with personalised exercises.

I adapted the micro-interactions and features of the Duolingo exercises to a conversation. I also added some new features that could help the user in an ongoing conversation.

Especially at the beginning, it’s normal that mistakes happen. Lingo points subtle on such, without interrupting or auto-correct the user while typing/speaking. Lingo gives hints, similar to a word-application, which furthermore need to be completed actively by the user itself.

How do you say this again?

The user can always ask Lingo for unknown words and sentences in its mother tongue. Lingo chimes in a passive way into the dialogue and completes the user with the missing words.

On a more advanced level, Lingo also shows the user how this sentence would be formulated by native speakers. Lingo understands the user and helps it phrase things even better with pointing the user to how this word or sentence could be expressed in a more natural way, similar to a real conversation. The user can furthermore memorise this more natural structure while saving it as a tinycard.

Hints for an on going dialouge

Sometimes the dialogue can get stuck because the user does not know what to answer or how to continue.

Reflect on your new learnings

During the conversation, the user has access to an overview of all misspellings and tips to reflect on the new learnings. All complements are set behind the chat bubbles.

The user gets aware of all mistakes that happened during the conversation and saves all words and sentences as Tinycards for further learnings.

With the help of Tinycards (another already existing app from Duolingo) words and sentences from the conversation with Lingo can be saved as flashcards. 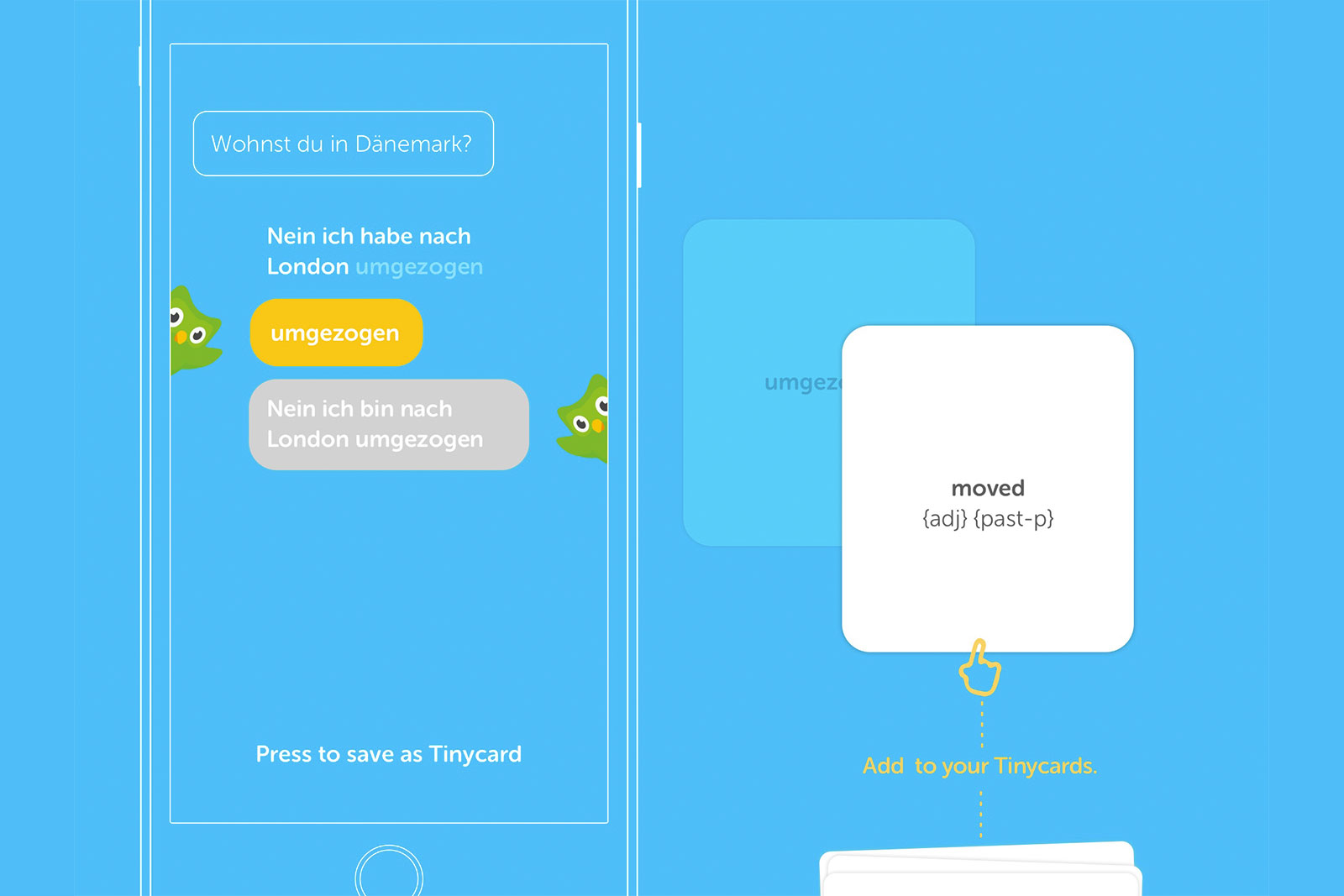 With the integration of Tinycards, the user can save essential words and sentences directly in the conversation

Right now, Tinycards is a separate app from Duolingo and therefore is not really an active part within Duolingo, and therein I see a weakness in the language learning process of Duolingo. With a dynamic integration of Tinycards, users could easily save interesting sentences and words, which furthermore could be categorised and made accessible for other users.

Help where help is needed

There are situations in a dialogue, that can overstrain the knowledge of the user. However, this should never harm learning a new language but rather encourage the user. 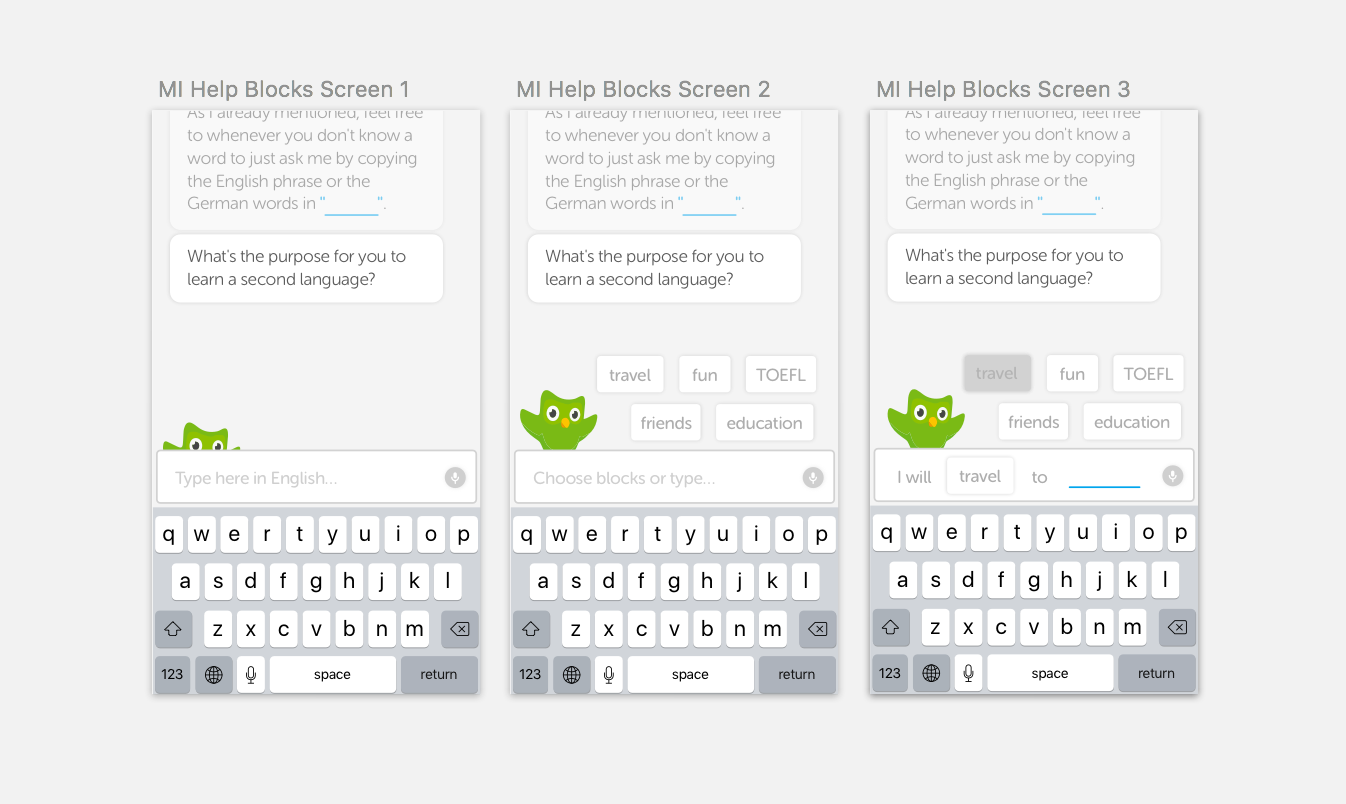 Lingo could help with possible answers, methods that the user is already familiar from the Duolingo exercises or tips on how to change the current dialogue to its desire. 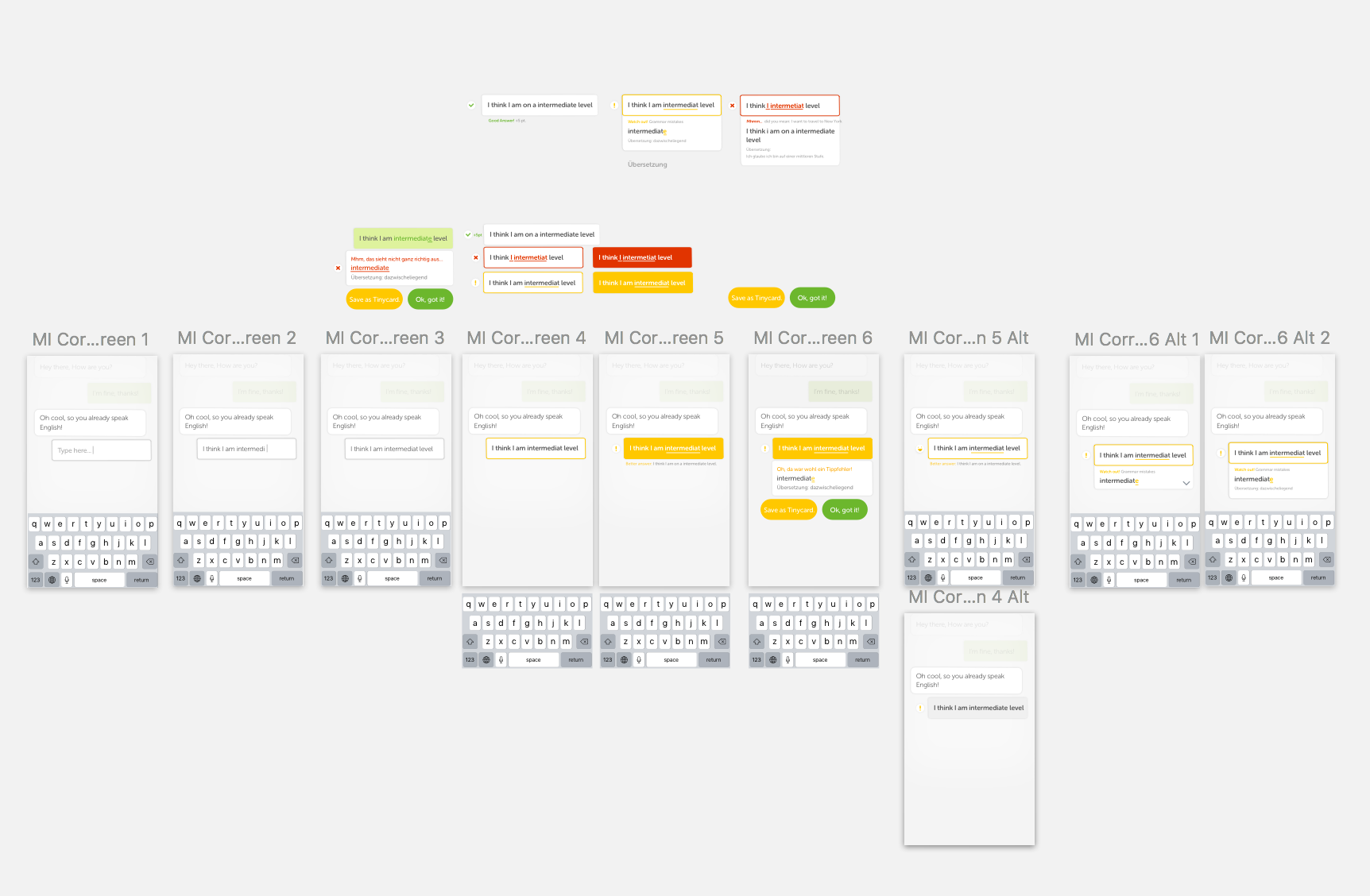 Now we are talking, right?

Having a conversation in another language shouldn’t be complicated. An essential part of conversational design is the language. How can I formulate something as a designer, so the user understands it at first attempt and can answer simultaneously? Especially in learning a new language, this is a vital part to consider when designing a conversational application. 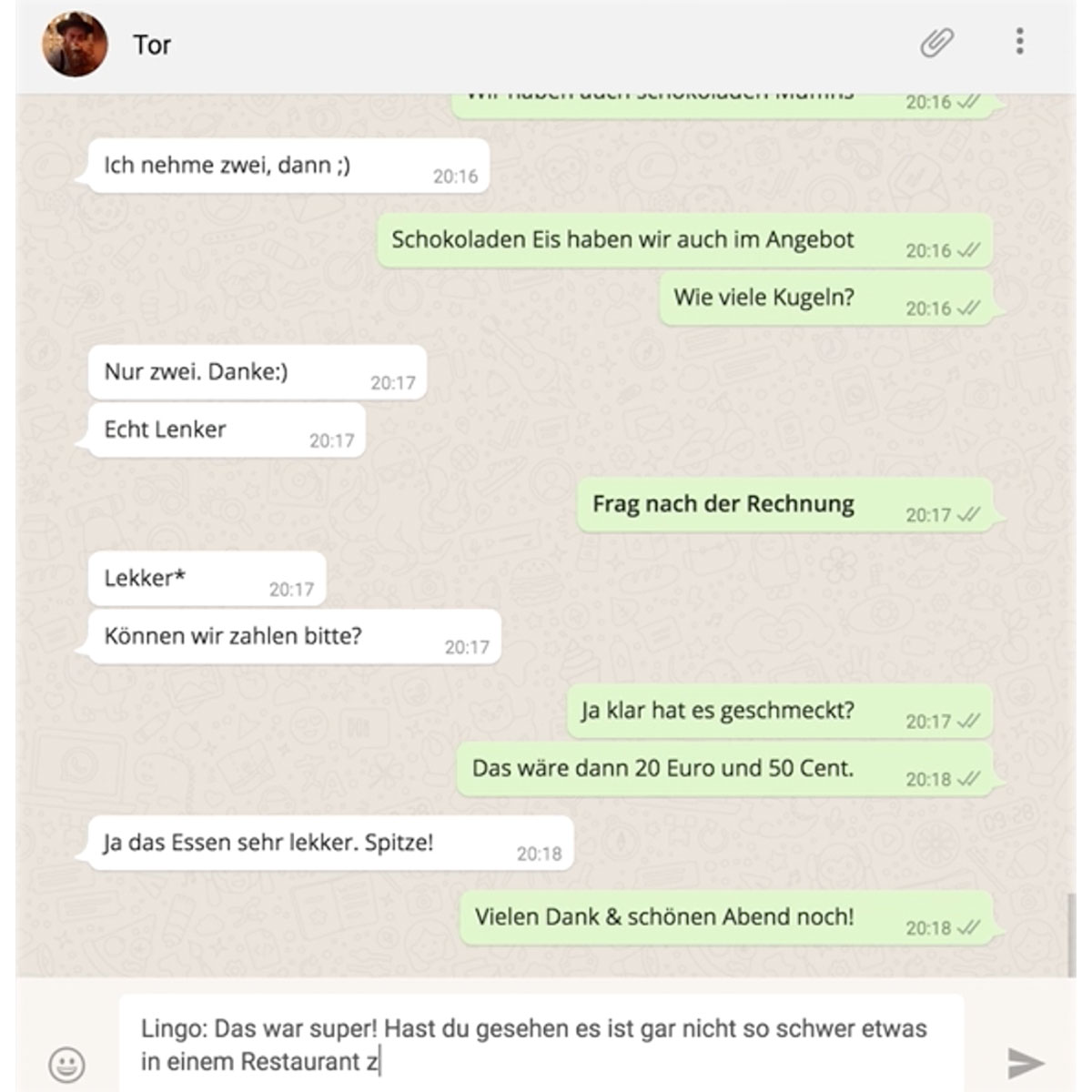 A rapid prototype of a ‘human’ bot in Whatsapp, based on a script and possible narrative of the conversation

What I found out was that my test users had difficulties with some more complex vocabulary or long sentences that they needed to translate first in their mother tongue. This requires a lot of time and can interrupt an ongoing dialogue.

A better way was to focus on short, precise and context-relevant sentences. However, the user does not need to understand every word but should identify the context of what’s inside a sentence and furthermore can answer correctly as well as remember the whole conversation path.

But also the needs for context-related learning appeared multiple times during my research as well as first user tests. Unlike mandatory school context do users of apps like Duolingo have different needs to learn a new language. 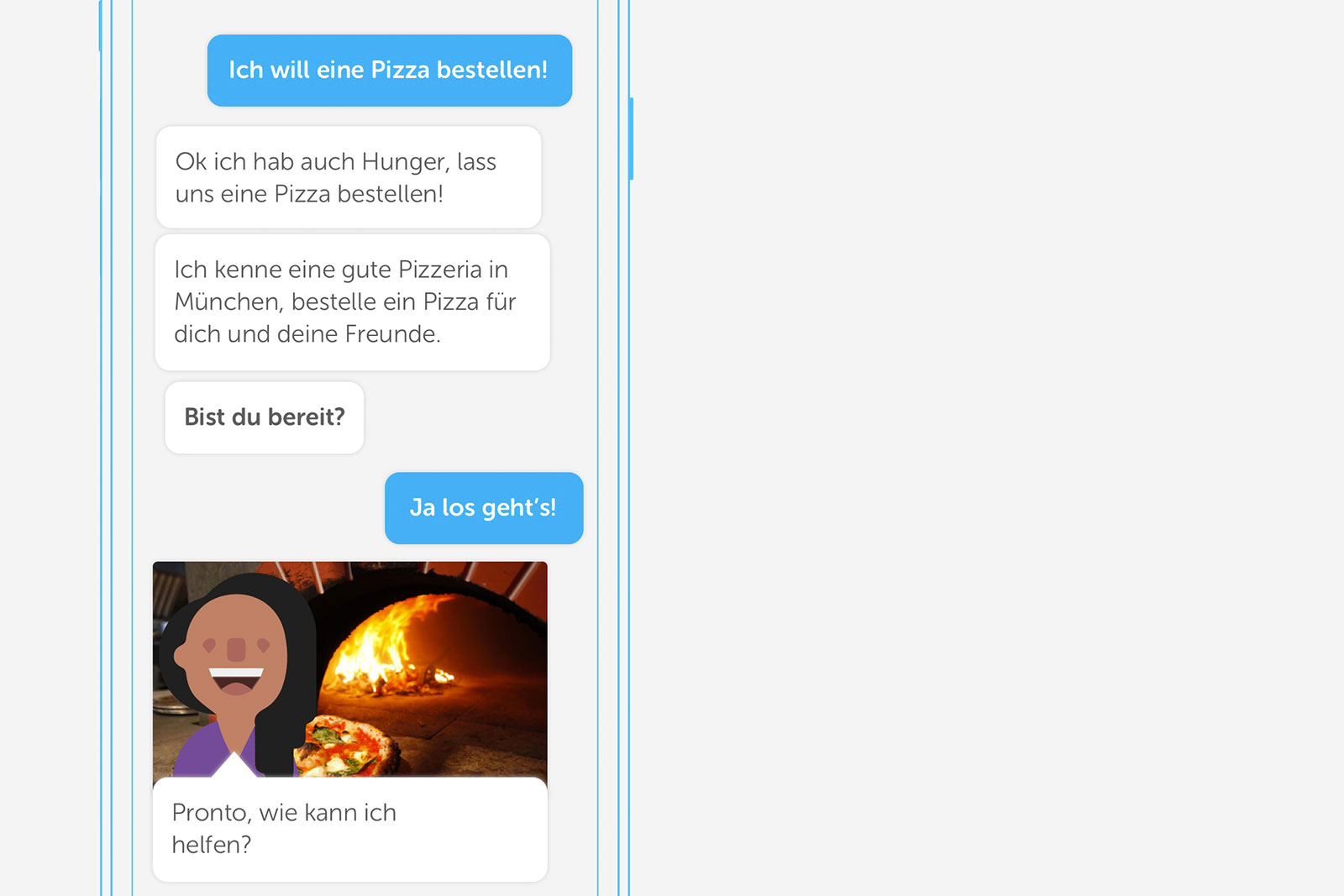 Another use case could be, that you soon start an exciting backpack trip to southern Spain, so Lingo will teach you everything you need to survive (and even a little bit more).

And precisely those needs are relevant to find out to be implemented in a dialogue.

But contextualised learning could also be talking about topics that Lingo doesn’t know yet. Like every conversational partner also Lingo has its knowledge borders and it shouldn’t hide those.

I was thinking about two simple solutions that could help to build up a conversation nevertheless.

Lingo could jump into the role of the questioning persona and could build new questions through the answers of the user.

Lingo is a mediation persona and could connect the user to other users that may have the same interest. Lingo could analyse user data and compare it to fields of interest but also language skills – a tandem-conversation could emerge.

Learning languages through conversations with real and artificial personas is a compelling use case for the current conversational UI and bots trend. Because the end-user is new to a language the conversation is happening in, designing such a conversation does need even more sensitivity. Besides meaningful micro-interactions, a key to successful conversational applications is still language itself.

As already mentioned, Duolingo did release its own conversational bots, just after this course was finished. Have a look! 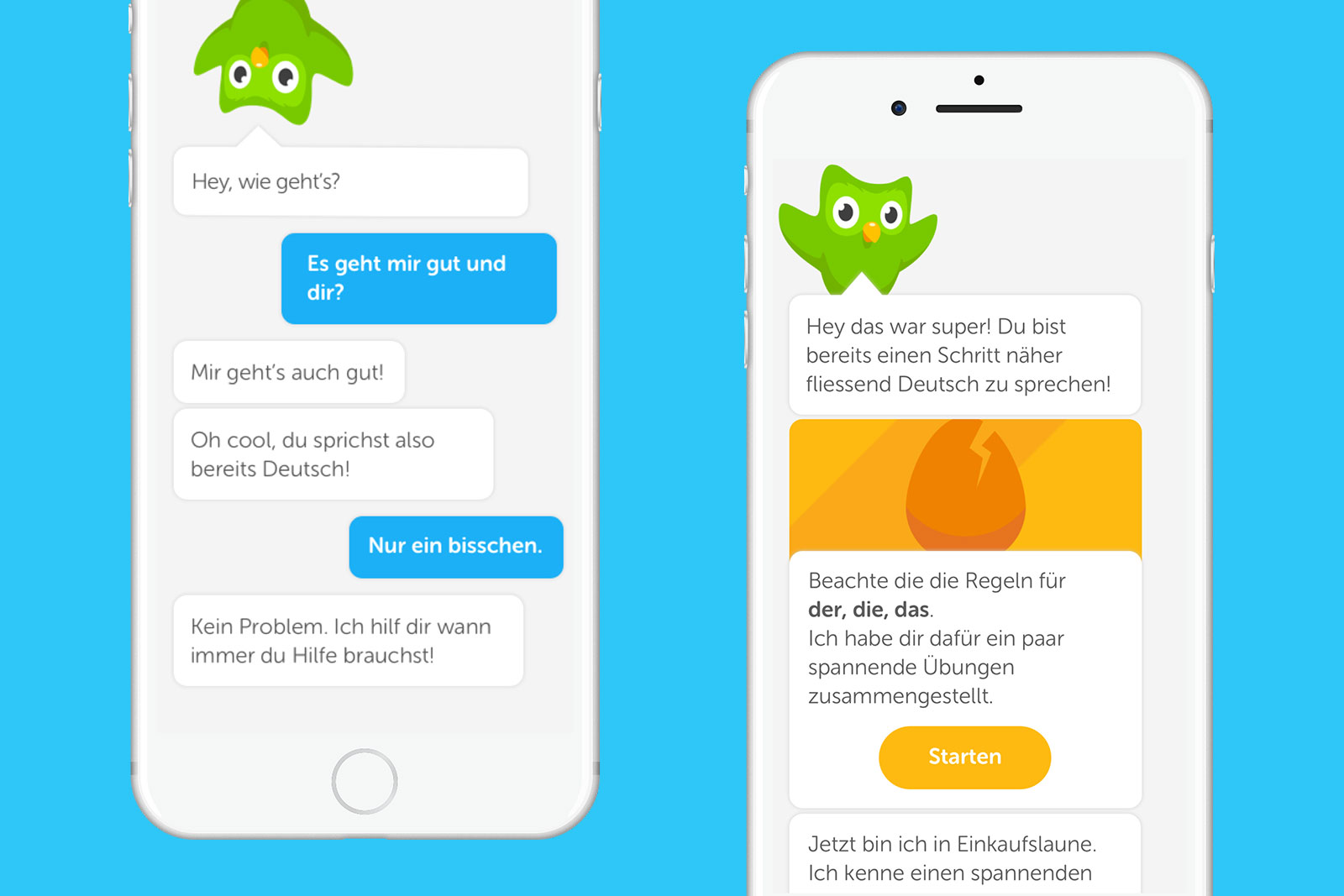